Because I Can
Juvenile Justifications for Irrational Behaviors
$8.30 a Gallon

That's how much I paid for gas in Amsterdam. God Bless our military!

My daughter is obsessed with this show, so I see perhaps 3 episodes a day. I suspect over the last year, I've every episode, maybe twice.

So imagine my astonishment while flipping through the channels here in my Hoofddorp hotel when I happen upon Dora teaching not Spanish, but ENGLISH!

Of course, after considering this for a moment I realized it made a lot of sense, since English is the second language most kids in Europe need. But it was rather surreal to witness it for the first time.

Posted by danisaacs at 10:12 AM | Comments (0) | TrackBack (0)
Middle Class now able to steal from the Capitalists

This is just brilliant. I gotta say, it never occurred to me to do this before, because, well, I like my house, and like having decent credit. I got a family to raise and all. And I can just about afford the payment.

But it makes me smile, a big smile, to see that the middle class was able to use the housing bubble to essential rob banks. Of course, they get their credit dinged, and can't live in the house they used to get the money. But they don't have to give any money back, and they aren't going to prison. But oh, their credit score will be low! Really, our desire to keep a good credit rating is all that prevents most of us in this situation from just saying "Oh Well, take the house back, I'm gonna go enjoy all this money you gave me."

Well, that and common decency. But hey, nobody in the Capital Markets plays by any rules that involve decency. If you're playing their game, why should you?

I most often describe my religious views as "antagonistic". I'm devoutly atheist, and find most religious traditions to be simply absurd on their face, and find little reason to avoid pointing it out. Christmas in particular I find a great deal to dislike. Be it the fact that Jesus, Christ or not, wasn't born in Dec. Or the fact that the whole thing is just a co-opting of established pagan traditions. Most annoying to me is the Santa Claus myth.

Now, I realize this is a secular tradition, and one that annoys the Religious equally. But why on earth do we need to lie to our kids about this Santa character? Do you think it adds any value? Would they not be just as happy to get gifts if they knew they came from Mommy and/or Daddy? I can tell you, Trevor gave two shits about what came from who. That he got it was important to him. I'd advise any parent (my wife included) to honestly think about what difference it makes, and if that difference is worth deceiving your children for. While you're at it, how about evaluating the efficacy of any of the "miracle" based explanations you provide to them?

That said, I love to give presents, and of course to get them. I like the spoils of the holiday, even if the underpinnings are nonsense. So I celebrate Giftmas. I dunno where that term originated. I recall first hearing it from Jeremy, many years ago. In any case, it's rather ubiquitous today. Not LOLCat ubiquitous, but close.

The best thing about having kids, is buying one gift, and that constituting both a give and a get. Exhibit A:

The AFX Long Beach Grand Prix HO Slot Car track. 50 ft of track, extends into the next room. Need to get a pic of it setup. Pretty sweet. Best part is, when Trevor opened it, he said "This is just like you wanted, Daddy!"

(first in a series of posts I made @ blogspot while this site was inoperable. Original date: Dec26,07)

So, being the awesome husband that I am, I bought for my lovely bride a laptop so that she may poot wirelessly around the house. I got an HP tx1302us (for $299 thanks to being one of 1000 people offered the deal on Black Friday). I got a 4g kit to make it usable. Now, on to what I hate.

User Access Control: If ever there were a more annoying "security" feature, the TSA must have it in their training materials. It prompted me FIVE TIMES while installing iTunes. WTF? Needless to say, it was the first thing to go.

The Wizards: Oh Dear God, how I hate these. Go ahead and try to connect to a WAP that isn't broadcasting its SSID. I spent 2 ours trying to figure this out. And it wasn't until all the OS updates were installed and rebooted that the options I needed were present. Of course, if it were as simple as it is in XP, I'd have been happy and done in 2 minutes. When will MS learn that not every user is a moron and that they should let some of us opt-out of the hand-holding? They managed to make most tasks more difficult. Incredible for most, but par for the course for them.

I will say, I like the icons for alt-tab. See, I'm not all hate.

I'm back! Thanks to Jeremy finally getting 15 minutes to get things fixed, I'll be blogging again. Not that anyone cares. But then, I only really do this so my kids will be embarrassed when their friends Google them.

A Pro-Military sticker with Jefferson's quote:

"The price of liberty is eternal vigilance"

Two things wrong with their use. First, Jefferson didn't say it. :)

But second, the thing that you must remain vigilant against is the government. Which is the very thing they use the quote to support. Governments are the most dangerous opponents of Liberty. Not brown people on the other side of the world.

So I finally got one of the Bill Tracking bills. I was only the second person to enter info in about it (it's a newer bill). Here's my bill

There is a good article in the Guardian about how the new "militant" Atheism will fail to challenge religion, in large part because of its tactics and attitudes. And it's in large part correct.

However, every world view has moderates. And they typically grow when there are extremists providing a nastier alternative. The Kinder, Gentler, Atheist will thrive.

Have you noticed how well Islam has grown since the Shia started kicking Western ass? Or how popular Evangelical Christianity has become in the US since those nutjobs started yelling louder? Hardliners are good for an Idea. Especially the subversion ones.

I got a wii. I love it. Best tennis this side of the real thing. Started a blog dedicated to it;

Someone I do not know referenced this blog. Not for any good reason. But I reckon at lest one person found there way over to this wasteland because of it. I never stop loving the internets.

And some dude in Tenn liked my blog so much, he took it's name. :) 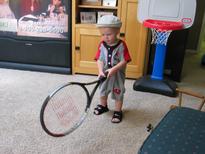 Recent Entries
$8.30 a Gallon
Dora the Explorer
Middle Class now able to steal from the Capitalists
I love Giftmas!
I Hate Vista
Back online!
Vigilance
Where's George
On the Failures of New Athieism
I got a Wii